This week’s blog is by Kelly Zea. Thank you, Kelly, for sharing your love of theater and God with 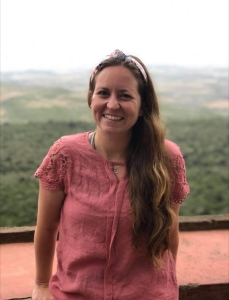 us both now and on stage!

One of my earliest memories was at the church my grandfather preached, watching the kids rehearse for their Christmas program. I remember adult’s encouragement to participate, but I shied away and just watched them sing, quietly and inevitably learning the lyrics. I remember the fear mixed with excitement as the window of opportunity neared its final moments to perform alongside the other kids. I remember my shy, single-digit aged, watch-from-the-sideline self was the bravest it had been as I took the chance and joined the chorus of cardboard costumed Christmas presents on stage. That small act of being present gifted me the value of being brave – both on stage and off.

Fast forward to my formative teenage years when our Pantherettes Poms team was cut from the school budget and eliminated, freeing up time to audition for my first high school play, “All I Really Need to Know I Learned in Kindergarten.” Disappointment of dancing off one stage turned into walking onto another, a blessing in disguise which would become the most memorable part of high school and lead to where I felt I truly belonged: the theater.

That first show quickly revealed an irrational insecurity when its only song required us to sing. The director accommodated my fear of singing by gifting me the shortest solo and single word, “Flush,” and also a nickname I’d bear the rest of my high school theater days. I later even purposely tried to get the role of the Wicked Witch to spare myself from having to sing. It was the summer going into my senior year when I decided to face my fears so that I could attempt to obtain the lead role in what would be my last high school show. I bought the cd to memorize the songs, took a choir class and extra lessons from my generous music teacher, and was more determined than ever. Earning the role of Annie Oakley in “Annie Get Your Gun” 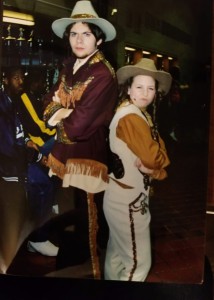 meant everything to me and required a growth spurt like none before to rise to the challenge. Thanks to my directors who believed in me and took the risk casting me and coached me throughout, I gained confidence and it reinforced the decision to continue to pursue acting by becoming a theater major in college.

While my time at Columbia College Chicago was a different story, my story with the stage thankfully did not end there and as I faced more fears.  My bravery was a building block to more blessings of opportunities such as: Second City’s Music Improv program, working as an extra in Chicago’s film and tv industry, and  the sweet suburban community theater the scene which ended up changing my life the most). Community theater became the space to stand up for faith and ultimately grow in faith.

I once again fought through fears in front of everyone auditioning for Overshadowed’s “It’s a Wonderful Life” in 2013 and resisted the growing urge to leave before it was my turn. It didn’t take long to realize that God kept me there for a reason. Overshadowed would soon become one of the most crucial places of my faith journey. It was a ministry, unlike any theater experience I’d had, and became a place filled with prayer and desires to glorify Him. Not without growing pains, of course, but thankfully alongside grace-filled believers valuing the power of prayer and God’s Word, I continue to experience healing and sanctification.

I’ve been blessed that theater has been a constant in my life and a home away from home.  Theater has  encouraged growth through habitual risk taking, generated creativity and more joy than I could have ever dreamt, and, most importantly, fostered community and brought me closer to God in so many ways. Although my trajectory went in a different direction than I dreamt as a little girl, I am so grateful that God was with me each step and led me to the places I’ve been. I’m grateful to the building blocks of bravery which led to so many amazing opportunities and memories that continue to form to this day.

Just as children learn to stack blocks when they are children, building blocks can be used in many areas of our lives. You can’t run before you learn to walk. You learn the alphabet before you learn to read. Is there something in your life you need to pursue step-by-step?

I encourage you to see that our biggest blessings are just beyond our fears. Is there a fear that’s been stealing your joy? Are excuses keeping you from trying something you’ve always wanted to? I pray you experience God’s peace and bravely follow His lead into adventures you couldn’t imagine, touch lives you don’t yet know, and become more like Him through all of it.

Isn’t it sweet of the Creator of the Universe to bless us with creativity and ways to glorify Him through the arts? Be brave and blessed, dear friend.

Kelly Zea is a Christ-following, theater-loving northwest suburbanite who works as an Instructional Assistant in a high school. When not professionally bantering with teenagers, she can be found pet sitting, capturing moments, indulging in theological discussions, dreaming of and missing Africa or running, punning and dancing through life, Zeabunking the lies of the world one reminder of God’s truth at a time. You can follow Kelly at@Kelifornialove28

We’d love to know how God is using theater in your life? Or what building blocks are helping you grow?

Because we’re all recovering from something.

reading, organizing, shopping, momming too close to the sun. Home is wherever the Army sends us.