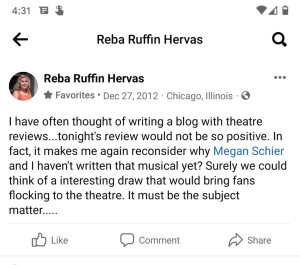 Megan and I had gone to see “Bring it On: The Musical.” It was packed with girls-all ages. The audience really seemed to love it for the most part. Megan and I–not so much. It was at that point that I felt like I needed to start a blog to be able to warn people not to spend their hard earned money on musicals such as that one. I also thought  that surely Megan and I were talented enough to write a musical that was, at least, less trite and that would bring in the people. Full of ourselves you might think…nope…the musical was just really bad and we thought if we found the right topic surely people would come.

Last night, the memory of my vain post popped up on Facebook and Megan commented and said, “Look! Now you’ve done both..started a blog and we wrote a musical.”

Yes, I did start a blog. You are reading in right now. It is sometimes theater, sometimes reviewing other theater productions or movies or TV. Sometimes it is just my thoughts about life and faith.

It took me a long time to get up the courage to start the blog. I wasn’t sure my writing skills were good enough. I thought I might have plenty to say, but I wasn’t really unique enough. I find that in this culture people would rather follow young and beautiful and I am neither. Nevertheless, I finally started it. It took me awhile to be consistent, but I’m pretty regular at posting one time a week. I decided that I was going to write the way I talk. I want you to almost be able to hear me speaking to you as you read what I have written. I decided that would be the way I would be unique. I know I don’t follow all the rules. I don’t know much about SEO and other things that would probably make it so my posts would be found and be read. Somehow, I have 90 followers now. (That must sound crazy to those of you who have thousands of followers!)

To each of you, I thank you for reading so faithfully.

Would I like more? Well, sure! Who wouldn’t? But, I guess that isn’t really why I write. I write because I have something to say and here is a place that at least 90 of you will read and listen and sometimes comment. That is special to me because writing has been healing for me this year.

I didn’t know that it would take me nine years to grow my blog to 90 readers, but as I always tell my casts…you do it for even one audience member and so I write for even just one.

Now, for that other item, the musical? It was called, “I’ll Be Seeing You.” It is the best thing Megan and I ever wrote. The audiences loved it and people ask us year after year when it’s coming back. Did you know a writer is never happy? We need to do a few rewrites, but it will be back and we can’t wait.

So, what is the point of all these words? Make a goal. Then verbalize it. Then do it. It’s not too late. Find something that makes you healthy and happy and don’t let anyone tell you that you aren’t good enough.

Hmmm. Reminds me of a Carpenters’ song, “Sing, sing a song, make it simple to last your whole life long. Don’t worry that you’re not good enough for anyone else to hear. Just sing. Sing a Song.”

Over the years there have been things I liked about Facebook and things that drove me crazy. This time, I’m thankful for the memory.

Now, I think I’m going to go sing a song.

Until next year.
This is just me, talking to you from the wings. 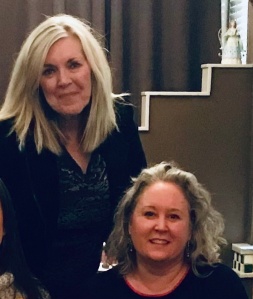 Because we’re all recovering from something.

reading, organizing, shopping, momming too close to the sun. Home is wherever the Army sends us.