Based on the 1942 film featuring Bing Crosby and Fred Astaire, the stage adaptation of Holiday Inn makes some vital updates (for example, cutting the film’s blackface number), while satisfying those of us who love old musicals and including songs like “White Christmas,” “Happy Holiday,” “Blue Skies,” and “Cheek to Cheek.”

Michael Mahler stars as Jim Hardy, a musician who leaves New York and show business to settle on a farm in Connecticut. He proposes to his song-and-dance partner, Lila Dixon (Kimberly Immanuel), who accepts him (seemingly reluctantly) and promptly leaves for a touring gig with the third member of their original trio, Ted Hanover (Will Burton). While Lila and Ted dance their way across the Midwest to Las Vegas, Jim embraces the farming life with the help of lively jack-of-all-trades, Louise (Marya Grandy).

Events collide when some of Jim’s New York friends come to visit as he is discovering that the farming idea is well….a disaster. How do any performers cope when they are in a crisis? Well, of course, they decide to put on a show!  Jim hatches a plan with his newfound friend Linda Mason (Johanna Mckenzie Miller), a charming, reserved schoolteacher ( who once aspired to be a performer). They decide to open the farm each holiday, bring in Jim’s performer friends, and put on a show!

I must say, I have never been disappointed in the costumes at Marriott’s; however, this time I was. As you know, wherever you sit at Marriott’s you will be looking at some of the performer’s backs at least half of the time. It would seem to me that it would be very important for the actors to look equally good from the back or front. Unfortunately, it was quite distracting to look at Michael Mahler who’s pants were…hmmmm….baggy. The Valentine’s dresses looked great until the girls turned around and we saw what looked like a huge decal on the chest of their dresses. The Easter dresses were ok, but the Easter bonnets, which were designed to be over-the-top, lost the class that I think that song usually demands. Overall, I would give the costumes a C-.

One of the things I love about Marriott’s is how effortlessly the set pieces move in and out. The cast is always brilliant as they push the pieces on and manage to do it in character. This show is no different.

One of the highlights is the piano. Since it is so much a part of this singing and dancing trio it becomes a central part of the design. As Michael Mahler is such an accomplished musician it is a delight to see what he brings to his character as he skillfully plays.

The other pieces fit the story perfectly. I loved the ladder that rolled around as different characters climbed on and off of it. Masterful use of the space and props/set pieces.

I must admit I wasn’t fond of Michael Mahler as Jim. I know I shouldn’t compare to the movie, but growing up seeing Bing Crosby in this part it was hard to listen to Mahler’s voice. I felt he was a bit cheesy in his portrayal and I wanted him to be smooth and in control. Also, Will Burton as Ted wasn’t exactly a Fred Astaire either. I wanted to like Ted, but be angry with him for his lack of friendship and loyalty towards Jim. Instead, I didn’t like him at all.

But then, Linda Mason, played by Johanna Mckenzie Miller, and Louise , played by Marya Grandy, walked on the stage and all was well. Grady was brilliant, charming, funny and brought an incredible amount of energy and life to the stage. Miller made us believe she loved Jim in such a way that I ended up wholeheartedly loving it.

The dancing ? Wonderful! If you haven’t seen clips of the tap number with jump ropes then you can’t imagine how breathtaking it is! Hands down a showstopper. Denis Jones deserves an A for his wonderful choreography that brought this story to life.

Ted Hanover : “Every now and then it’s a good idea to pause in our pursuit of happiness and just be happy.” 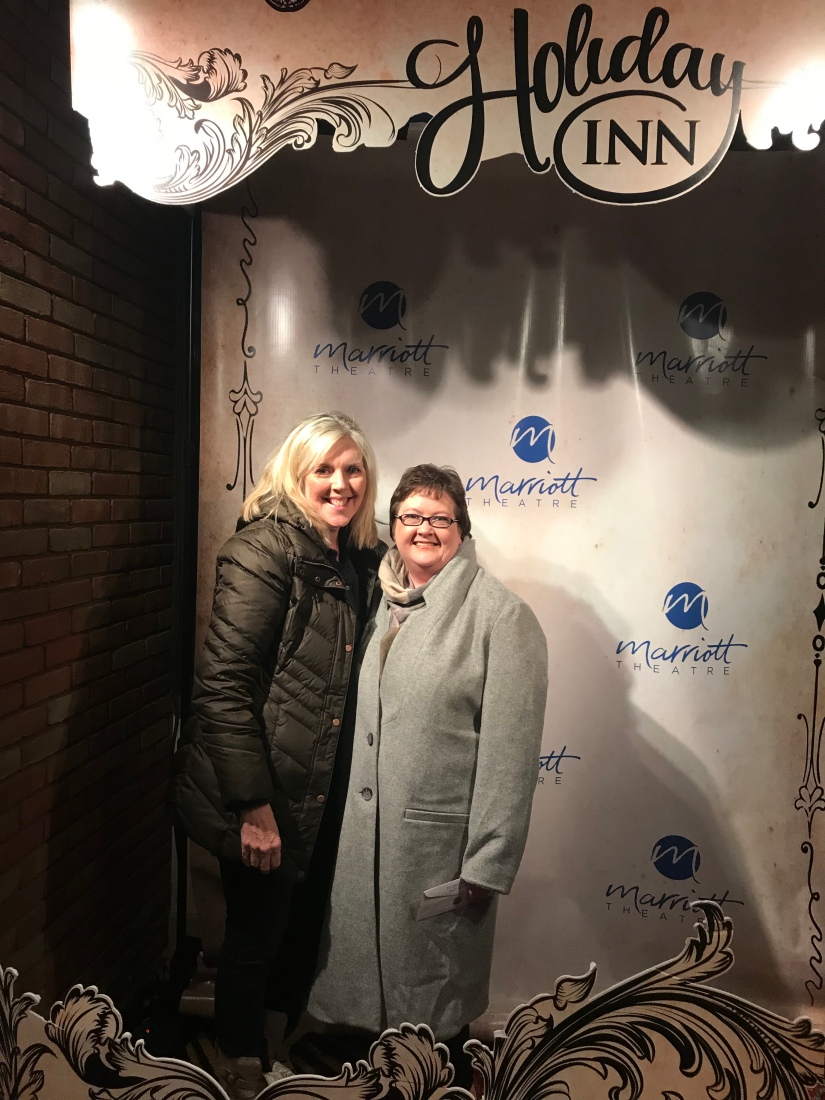 I mistakenly thought that this show would be too much like White Christmas. I was so wrong. I smiled most of the time. I loved the music, dance and love story. It made me remember the movies of my youth and just plain made me happy.

If you can get a ticket. Go. You won’t be disappointed.

HOLIDAY INN runs through January 6 at the Marriott Theatre, 10 Marriott Drive, Lincolnshire, IL 60069. Tickets are available at 847-634-0200 or marriotttheatre.com.

The Art of Blogging

Creative Journey of Kris and Aileen

bloom where you're planted